Find Cinnamon leaf oil in Mother Jai’s Aroma Sprays and many other truly natural products. Petroleum and artificial preservative free! We ONLY use all natural and American made Everclear as an emulsifier and preservative! 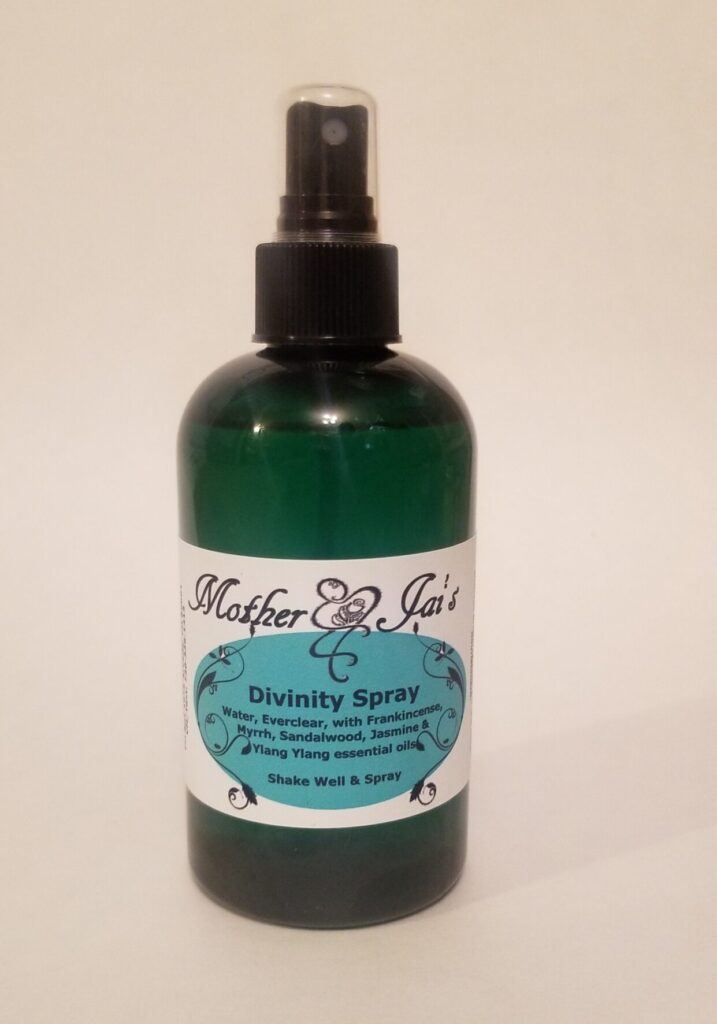 Water based sprays with 5% essential oils for personal Aromatherapy.

Cinnamon leaf oil comes from Cinnamonum verum (also called Laurus cinnamomum) from the Laurel (Lauraceae) plant family. This small and bushy evergreen tree is native to Sri Lanka, but now grows in many countries such as India, China, Bangladesh, Myanmar, and Indonesia. There are actually over 100 varieties of C. verum, with Cinnamonum zeylanicum (Ceylon cinnamon) and Cinnamomun aromaticum (Chinese cinnamon) as the most consumed.

The oil extracted from cinnamon leaves contain phenols and beneficial components like eugenol, eugenol acetate, cinnamic aldehyde, linalool, and benzyl benzoate. It also has low levels of cinnamaldehyde, an excellent flavoring agent and the active component that helps repel mosquitoes and other insects. The leaf oil has a higher eugenol content then the bark oil, which increases its analgesic properties.

Blending: This oil blends well with various essential oils, so it is added to many aromatherapy preparations. It enhances the effectiveness of other herbs and essential oils, thus speeding up the treatment of various herbal remedies. Furthermore, many herbs can have an unpleasant taste. Cinnamon or cinnamon oil is often added to herbal preparations to make them taste better.

Cinnamon leaf oil can be used as an additive in soaps and a flavoring to seasonings. When used in aromatherapy – diffused, applied topically (I recommend diluting with a mild essential oil or mixing in your favorite cream, lotion, or shampoo), or added to your bath water – it can have health-promoting effects. Here are some ways to use cinnamon leaf oil for your health and around your home:

Use it as a disinfectant. With its strong germicidal properties, cinnamon leaf oil works as a non-toxic natural disinfectant. Use it to clean your toilets, refrigerator, kitchen counters and other surfaces, door knobs, microwave, and sneakers. You can even use it to clean and disinfect your chopping boards.

Make a facial scrub. Mix it with cinnamon sugar, orange juice, and olive oil to create a rejuvenating scrub that has antiseptic properties to help kill facial bacteria effectively.

Gargle as a mouthwash. Add a drop or two to a glass of purified water, and gargle with it. For people with dentures, simply make a solution of water, hydrogen peroxide, and cinnamon leaf oil, and soak your dentures in it.

Add it to your foot soak. Mix a drop of cinnamon leaf oil in a bucket of warm water, and then soak your feet in it. This works great for athletes and people who wear closed shoes for most of the day.

Use cinnamon leaf oil as an insect repellent. Did you know that the scent of cinnamon leaf oil can deter pesky household insects, such as black ants, mosquitoes, roaches, and flies? Studies found that it may even be more effective at repelling mosquitoes than the toxic chemical DEET. Simply spray or diffuse the oil around your home. You can also spray it over your mattresses and sheets to get rid of bed bugs.

Add it to your shampoo. Add a drop of cinnamon leaf oil to your regular non-chemical shampoo. This will help keep your hair healthy and, in children, help kill stubborn head lice.

Instead of fabric softener. Add a few drops of the oil to wool laundry drying balls. As the balls mingle and fluff damp fabric in the dryer, the scent is transferred. I love adding essential oils when laundering bedding or towels.

Warmer diffusion. Mix a tablespoon of pure coconut oil with two to three drops of cinnamon essential oil, and place it in a wax warmer. As the coconut oil melts, the essential oil scent is released into the air.

Clean better. Place a few drops of cinnamon oil in a homemade cleanser. As you wipe down surfaces, the oil leaves behind a nontoxic scent that some studies claim may help reduce bacteria growth. You can read these and decide for yourself in Public Library of Science (PLoS) ONE and Food Control.

Relax in the bath. Place a few drops of oil in your bath water. As you soak, the aroma fills your bathroom and creates a calm feeling.

Sleep Better. Put one drop of cinnamon essential oil on the back of your pillowcase to promote restful sleep.

Mix a drop or two of cinnamon oil into massage oil before indulging.

Side Effects of Cinnamon Leaf Oil

Use cinnamon oil in moderation and properly diluted, as high dosages may lead to convulsions in some individuals. This oil may also lead to side effects such as skin irritation, mouth sores, dizziness, vomiting, and diarrhea. It may irritate your urinary tract, intestines, and stomach lining, if taken internally. If these symptoms occur, consult a healthcare practitioner immediately.

Very high quantities of cassia cinnamon may be toxic, particularly in people with liver problems. Because cinnamon may lower blood sugar, people with diabetes may need to adjust their treatment if they use cinnamon supplements. An ingredient in some cinnamon products, coumarin, may cause liver problems; but the amount of this compound ingested is usually so small that this wouldn’t happen for most people.

If you take any medication regularly, talk to your doctor before you start using cinnamon supplements. They could interact with antibiotics, diabetes drugs, blood thinners, heart medicines, and others.

Word of Caution: Being strong in nature, cinnamon oil should be avoided for internal consumption. Furthermore, it can have adverse effects on the skin if used topically in concentrated form. Therefore, it should be used in diluted form. Before using the oil, it should be tested to make sure it suits your skin. You should apply only a small quantity of the oil initially and check if you develop an allergic reaction. Do not apply the oil to the face and other sensitive areas.